This week the New School for Social Research will host a conference in New York City entitled “The Fear of Art.” The keynote address will be delivered (on video) by Ai Weiwei, the Chinese dissident world renowned as a “contemporary artist” and “political activist.”

Ai’s reputation as a political dissident is undoubtedly well founded. It derives in large measure from his courageous activity in response to the horrific 2008 Sichuan earthquake that killed thousands of his fellow Chinese, including countless schoolchildren. In support of parents who blamed the government’s shoddy construction methods for needless deaths in the province’s schools, Ai provided an online forum on his blog for the Sichuan Earthquake Names Project. Defying government stonewalling, it served to publicize the names of deceased students throughout Sichuan province whose identity had been uncovered by an unofficial group of researchers and volunteers. Ai’s high-profile activism is largely credited with pressuring the government to release accurate figures on the death toll, which it had attempted to downplay.

But is Ai Weiwei really an artist?

That question can best be answered by a clear-eyed consideration of the work he has described as the most emotionally meaningful to him—his Snake Bag installation.

Inspired by the Sichuan earthquake, it consists of 360 grey and black backpacks joined together to simulate a 15-meter-long snake. The piece vividly represents a snake. Yet it does not function as a traditional work of sculpture would—that is, by embodying its meaning in what is visually represented. It instead belongs to the spurious postmodernist genre of “conceptual art.”

As such, its meaning cannot be directly grasped or even guessed from the object itself. Who would think to connect a snake with the Sichuan (or any other) earthquake? When one looks closely, one can see that the snake is cleverly composed of backpacks. Yet even then, how would one guess that the backpacks were meant to refer to students killed in the earthquake? One wouldn’t. The piece’s meaning is conveyed by accompanying verbal accounts, not by the work itself.

or Elizabeth Catlett’s And a Special Fear for My Loved Ones. 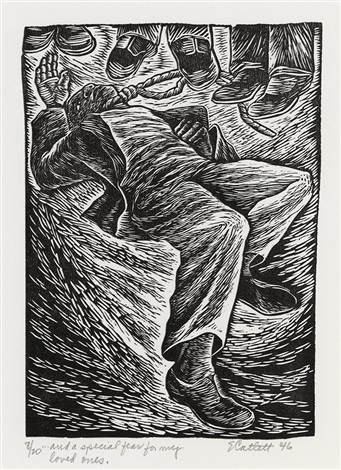 One might not recognize the specific historic event that inspired the Third of May, for example. Yet the image movingly conveys the brutal terror inflicted by a merciless firing squad. And like all true art, it therefore has significance far beyond one moment in history. So, too, Catlett’s stark image of a lynched black man, sprawled beneath the feet of his executioners, chillingly embodies the horror and inhumanity of such an event, regardless of the particular circumstances.

Why is the postmodernist genre of “conceptual art”—to which Ai Weiwei’s Snake Bag belongs—“spurious” in my view? Because it originated as one of many anti-art gestures in the 1960s, whose very inventor explicitly recognized it as something other than “art.” It is one of many ironies of today’s artworld that virtually the only “contemporary artists” who are taken seriously are those working in such anti-art genres!

2 comments on “Is Ai Weiwei an Artist?”