Valentin who? Valentin de Boulogne (1591–1632), that’s who! But I must confess that I had never heard of this masterly painter before the landmark exhibition now at the Met, though I’ve been studying art history for more than half a century.1 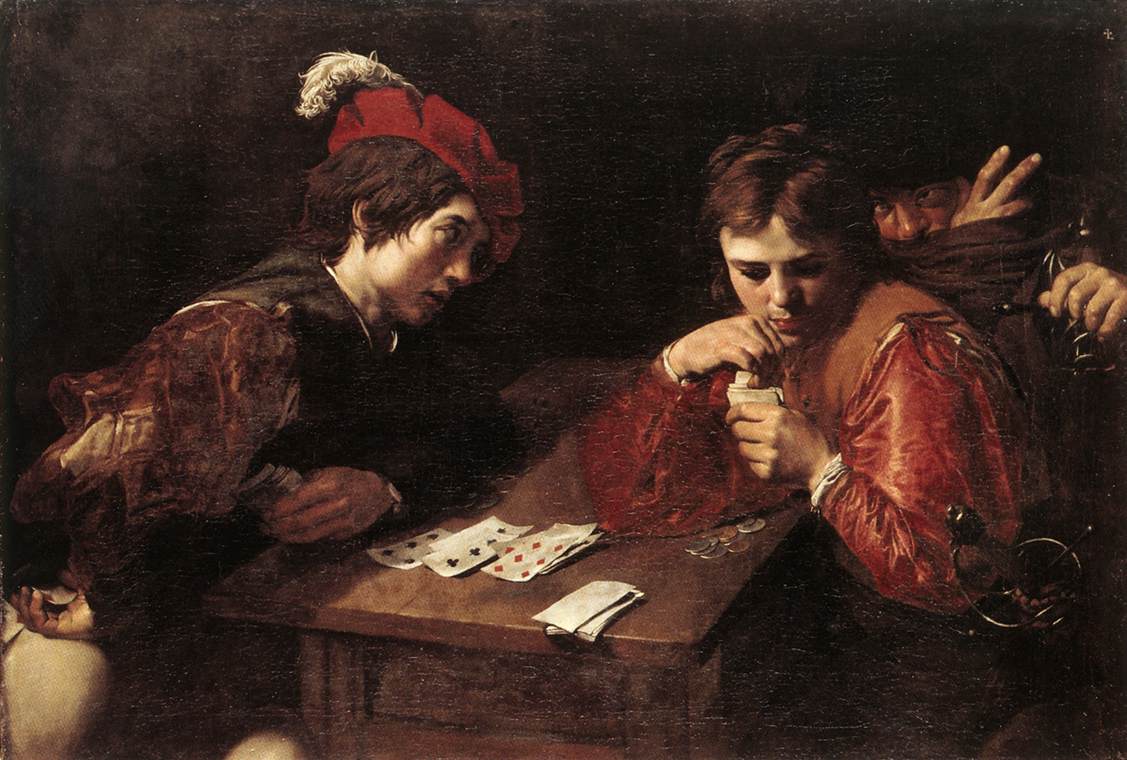 Valentin achieved no small fame in his lifetime, however. Ranked high among the followers of Caravaggio (1571–1610), he also inspired notable nineteenth-century realists such as Courbet and Manet. Yet, astonishingly and inexplicably, Valentin de Boulogne: Beyond Caravaggio is the first monographic exhibition ever devoted to him. Co-curated by the Met’s Keith Christiansen, John Pope-Hennessy Chairman of the Department of European Paintings, and Annick Lemoine, lecturer in art history at the University of Rennes, it at last gives Valentin his well-merited due.

The son of a painter and glazier, Valentin was born near Paris in 1591 and by 1614 had moved to Rome—then Europe’s cultural capital—where he remained till the end of his short life. Like many of the ambitious painters who flocked to that city in the early seventeenth century, he emulated the style of Caravaggio. He not only adopted Caravaggio’s earthy naturalism; he also employed his method of painting directly from live models posed in the studio, thus dispensing with the elaborate preparatory drawings used by Renaissance masters.2

Valentin left his own distinctive stamp on Caravaggesque painting, however. His work is marked by psychological insight and subtlety rare in Caravaggio. His Judith and Holofernes, for example, is far more believable than Caravaggio’s version of the same subject.

Departing somewhat from the biblical narrative—which describes Judith as a “widow” (suggesting some maturity)—Valentin’s Judith has an almost childlike face. In sharp contrast with Caravaggio’s Judith, she does not recoil from the horrific deed, but proceeds with all the tight-lipped, cold-blooded determination that would have been required to carry it out. And the clandestine drama of the scene is heightened by a starker composition, subtly illuminated in front of a cavernous darkness—not diminished as in Caravaggio by a gratuitous swath of red drapery. It is one of the most compelling pictures in the Met’s show.

So, too, Valentin’s Cardsharps, cloaked in deep shadow, have a far more sinister aspect than those in Caravaggio’s more famous treatment, which is colorful but superficial. Especially chilling in the Valentin image is the predatory gaze of the cheat eyeing his pathetic victim—who clutches his cards to himself, oblivious of the evildoer’s cross-eyed partner in crime lurking behind him.

A distinctive aspect of Valentin’s approach to religious subject matter was his tendency to focus on a rarely depicted moment in the narrative. For the story of Susannah and the Elders from the Book of Daniel, for example, he eschewed representing Susannah bathing alone in her garden, ogled by the hidden elders. That scene has served many an artist as a welcome pretext for depicting a sensuous female nude. But Valentin chose instead to represent, in The Innocence of Susannah, a later moment, in which the young Daniel points the finger of judgment at the guilty elders for bearing false witness. While one of them pulls at the garment of their fully clothed victim, he is apprehended by an officer, and she turns toward the viewer, arms folded across her bosom in a gesture of self-protecting modesty. To her left, in the lower right corner of the painting, stand two small children. One gazes out at the viewer with an anxious look, while the other tugs at her robe, as if to ask, “Mommy, what are those men doing to you?” It is a poignant touch unlike anything I know of in Caravaggio.

Equally remarkable, Valentin’s Samson (the poster image for the exhibition) shows the biblical hero neither in one of his prodigious feats of prowess nor in the act of being unmanned by Delilah—the narrative moments most often chosen by artists. He is instead depicted alone, at rest. He is leaning on the jawbone of an ass, the crudely improvised weapon with which he has slain a multitude of Philistines. Wide-eyed and agape, he seems to be reflecting, not on his victory but on the magnitude of the havoc he has wrought. Is it perhaps of further philosophic import that Valentin has rendered Samson in his own likeness?

Another remarkable painting is Valentin’s Christ and the Adulteress, illustrating a well-known passage from the gospel of John. As Jesus is intent on writing a lesson on the ground for his disciples, he is interrupted by a group of scribes and Pharisees (Valentin represents them as figures of authority in 17th-century armor). Thrusting forward a woman guilty of adultery, for whom Mosaic law prescribed punishment by stoning, they demand to know what judgment Jesus would render. On reflection, he responds that whoever is without sin should cast the first stone. Valentin’s intensely personal moral focus is clear. Electrifying highlights create a riveting connection between Christ’s stern gaze (in the biblical account, he later instructs the adulteress to “sin no more”) and the woman, who hangs her head in shame, her half-bared bosom tellingly contrasting with her accusers’ armor.

In Valentin’s hands, The Last Supper, too, becomes an extraordinarily intimate event—so very different from Leonardo’s formal scene, which he would have known from engravings. Moreover, its ingenious composition seems to leave an open place at the table for the viewer. One could easily imagine taking a seat at it, flanked by the two disciples whose back is toward us. As Jesus appears to announce “one of you will betray me,” Judas (on the left) guiltily turns away, clutching his bag of silver behind his back, the evidence of his betrayal, while the disciple on the right bends to pick something off the floor, apparently missing the moment of intense drama reflected on the other disciples’ faces.

Valentin’s ability to make the viewer feel more like a participant than a mere spectator was evident even in what was probably one of his early works, The Return of the Prodigal Son. The broad sweep of the venerable patriarch’s compassionate embrace (which spans two thirds of the image) seems to encompass the viewer along with the prodigal, who kneels contritely before his father.

Such works are yet another reminder that even the most timeworn subjects can be infused with new life by a talented artist.

Like Caravaggio, Valentin knew the rowdy taverns and bawdy night life of Rome well, and depicted aspects of that life in his paintings. Rome in the seventeenth century scarcely lived up to its epithet of “holy city.” It was instead a seething den of crime, violence, and debauchery, from which artists not only drew their secular subjects but also picked the live models for their sacred images. As Caravaggio’s biography attests, artists often became embroiled in its turbulent events. Most of what we know about them is derived from police reports and court proceedings—as vividly documented in Andrew Graham-Dixon’s Caravaggio: A Life Sacred and Profane, for example. And scholars have only begun to plumb the depths of such records to gain a fuller picture of the period. One fact that has emerged is the existence of a lively market of private art patrons—though art historians formerly tended to regard Counter-Reformation painting as driven primarily by the church. The curators even cite paintings being used for money laundering by a notorious diamond thief who doubled as a dealer!

Valentin’s numerous scenes of taverns and music-making are tinged with a profound sense of melancholy that transcends the crass vulgarity of Roman low life, however, and suggests, in the curators’ words, “a meditation on life itself—its deceptions and its transient pleasures”—as well as its uncertainties, I might add. Especially haunting is Concert with a Bas-Relief. Notably, it features a sad-eyed young boy at its center, as does Valentin’s equally melancholic The Four Ages of Man.

In this connection, the curators quote an apt passage from the sixteenth-century philosopher-essayist Michel de Montaigne, relating the following experience:

I am not melancholic, though much given to daydreaming. . . . Once, while gaming and in the company of ladies, I was suspected [of] being preoccupied with some ill-digested jealousy or with my player’s luck. But in truth, I was meditating. . . . Only a few days before, as [a friend] was returning from just such a party, his head filled, like mine, with nonsense, women, and merriment, he had been surprised by fever and death.

Montaigne unwittingly presaged Valentin’s own death a few decades later. In the summer of 1632, after a night of drunken carousing, the painter fell into a fountain, subsequently developed a fever, and died, at the age of only 41.

If you are anywhere near New York between now and January 16, 2017, don’t miss the once-in-a-lifetime chance to survey at first hand and in depth this stellar painter’s work, culled from diverse public and private collections here and abroad. Some of the paintings have never before been loaned. What I have presented here are but a few of the show’s highlights. The exhibition numbers forty-five of Valentin’s sixty extant works, many of them on loan from the Louvre, and will travel there for an opening in February. If you can’t visit either New York or Paris, you might want to console yourself with a copy of the comprehensive catalogue, Valentin de Boulogne: Beyond Caravaggio.