What’s wrong with today’s “protest art”—which occupies so much of our public space? Mainly this: it’s long on protest and virtually devoid of art.

That sad fact has been vividly demonstrated of late by two New York exhibitions: Art and China after 1989: Theater of the World (closed January 7 at the Guggenheim) and An Incomplete History of Protest: Selections from the Whitney’s Collection, 1940–2017, now on view at the Whitney Museum.

Words in Place of Images

The first work encountered by a visitor to the Whitney exhibition epitomizes the shortcomings of recent “protest art.” It consists merely of a black flag emblazoned with the statement “A Man Was Lynched by Police Yesterday” in bold white letters. Created by Dread Scott (the pseudonym of arts activist Scott Tyler, b. 1965), the flag referred to the 2015 shooting of an unarmed black man, Walter Scott, by a white police officer in North Carolina. But one would have to read the wall label to learn that.1

I should add that Dread Scott first attained notoriety with his 1989 protest piece What Is the Proper Way to Display a U.S. Flag?, which he called an “installation for audience participation.” The participation it invited was for viewers to step on the American flag while writing their thoughts in the comments book displayed above it. That this participatory installation was part of an exhibition organized by Scott’s fellow students at the School of the Art Institute of Chicago tells you something about the caliber of art instruction at that institution. Yet degrees from such institutions are what qualify someone as an “artist” these days.

When Scott’s 1989 flag piece provoked a national furor, he claimed (perhaps disingenuously) that his intent “was not to desecrate the flag” but to “open up discussion about America, U.S. patriotism, and the . . . flag.” As is often the case with such “conceptual” installations, however, the piece was viewed quite differently by the public—not least, members of Congress. In any case, Senator Bob Dole, for one, was entirely justified at the time in referring to Scott as a “so-called ‘artist.’”

By the same token, Scott’s “A Man Was Lynched” flag is so-called art. Although it manages to trigger a momentary emotional response by Scott’s having substituted the negatively charged verb “lynched” for the blander but more precisely relevant term “shot,” it pales in comparison with the impact of a genuine work of art dealing with the same theme. For example, Paul Cadmus’s drawing To the Lynching (1935)—unlike Scott’s flag—chillingly embodies the brutality of a lynch mob. So, too, Elizabeth Catlett’s linoleum cut And a Special Fear for My Loved Ones (1946) starkly conveys the power of the lynchers and the helplessness of their victim.

Moreover, by representing the human dimension of such acts, these images transcend the particular circumstances of any single injustice to convey something more universal. That is what makes them art, in contrast with Scott’s mere verbal protest against one unjust event. Since both of these works are actually in the Whitney’s collection, why were they not included this exhibition? (The 1940 starting date could have easily been extended back five years to accommodate the Cadmus drawing.) Might it be that such works of genuine art would have revealed the relative feebleness of more recent protest pieces?

The vast majority of the works displayed at the Whitney, like so much “contemporary art,” rely heavily, if not exclusively (as in Scott’s lynching flag), on verbiage to get their message across. Those that employ imagery do so mainly through photographs—not through the arts of drawing or painting.

In a gallery devoted to Vietnam war protests, two whole walls comprise anti-war posters that make use of both words and photographs, as well as of some simple imagery. According to the docent I happened to hear, they were “not meant as art,” however, but were intended as “ephemeral” items to be posted on one’s dorm room wall, for instance, and then discarded. When I asked why they are being exhibited in a museum of art, she responded that we can now appreciate their “artistic qualities.” Just what those qualities are she did not say.

Nor are “artistic qualities” evident in Martha Rosier’s video piece Semiotics of the Kitchen (1975)—a mildly amusing feminist-inspired parody of Julia Child’s French Chef TV series. According to the Museum of Modern Art, the piece expresses the “rage and frustration of oppressive women’s roles.” Never mind that Child saw her role in the kitchen as anything but “oppressive.”

Perhaps the most absurd of the Whitney’s exhibits is Spaces and Predicaments [scroll down and click on thumbnail], comprising two abstract installations: Pyramid Up and Down Pyramid (1969), by Melvin Edwards, and Internal I (1977), by Senga Nengudi. The wall text informs us that these artists “chose personal, oblique, and allusive means to question how social spaces are made, engaged, and controlled.” Oblique and elusive might have been a more accurate description. Activist-artist David Hammons is quoted as saying that their work is “abstract art with a message.” I defy anyone to discern the message from the work alone, however. Like most contemporary work, it is unintelligible without a verbal gloss.

Animal Cruelty and Other “Conceptual” Aberrations

The Guggenheim’s Art and China after 1989 provoked heated public controversy even before it opened, thanks to a New York Times article previewing it (“Where the Wild Things Are: China’s Art Dreamers at the Guggenheim,” September 20, 2017). The main objection was to several “conceptual art” pieces involving the exploitation of live animals. As described by the Times, one was a seven-minute video showing

four pairs of American pit bulls tethered to eight wooden treadmills. The camera closes in on the animals as they face each other, running at high speed. The dogs are prevented from touching one another, a frustrating experience for animals trained to fight. The dogs get wearier and wearier, their muscles more and more prominent, and their mouths increasingly salivate.

Although animal cruelty was the main public concern, some of the many comments posted by readers in response to the Times article astutely questioned whether such work should even qualify as art.

As I noted on Facebook on October 12, the Guggenheim withdrew the three most offensive pieces. But far from acknowledging that such pieces were in fact morally reprehensible, the museum’s press release merely cited “concerns for the safety of visitors, staff, and participating artists after ongoing and persistent threats of violence in reaction to the incorporation of live animals in the creation of the works.” Moreover, it missed the larger point made by many Times readers, including me. Such “conceptual” pieces should not be regarded as art.

Yet the Guggenheim show consisted almost exclusively of such work. As I’ve indicated in “Is Ai Weiwei an Artist?” and argued more fully in Who Says That’s Art?, however, “conceptual art” is an entirely bogus genre. It began as a deliberate anti-art phenomenon, just one of the many bizarre postmodernist reactions against the dominance of Abstract Expressionism. In fact, its first theorist, Henry Flynt, is explicitly characterized as an “anti-art activist” (emphasis mine) on his authorized website.

Apart from the troubling fact that “conceptual” work invariably “defie[s] easy explanation” (as the Guggenheim itself acknowledged in its introductory wall text), the term falsely implies that what is distinctive about such work is that, allegedly unlike traditional art, it deals with ideas. Genuine art has always dealt with ideas, however. The difference is that in traditional work the ideas are embodied in intelligible imagery. They are conveyed directly. 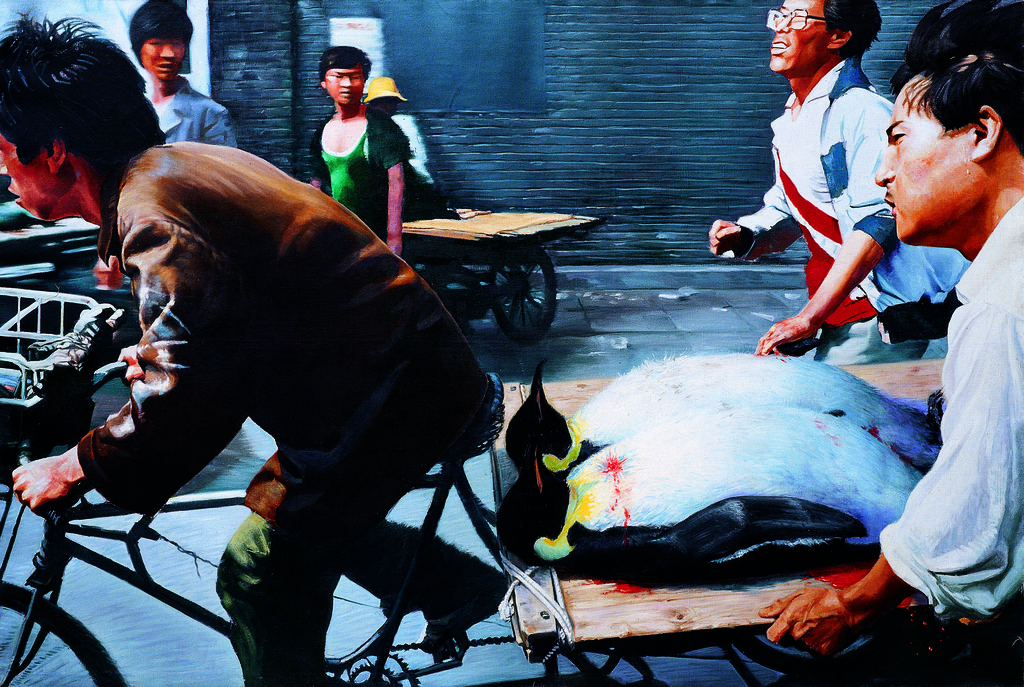 Consider, for example, two of the few paintings that were included in the Guggenheim show. Wang Xingwei’s New Beijing (above) depicts a street scene in which two bloodied penguins lying supine on a wooden stretcher are being hurriedly transported by bicycle past two staring onlookers. The image has the impromptu quality of a news photo captured on the run. Created soon after Beijing had won its bid for the 2008 Summer Olympics, New Beijing is an ironic allusion to the tragic Tienanmen Square Massacre of 1989, in which peaceful protestors were brutally shot down by government forces. Also chilling is Liu Xiaodong’s Burning a Rat, showing two well-dressed young men standing on a river embankment, enjoying the spectacle of watching a rat die that they have set fire to. It is a disturbing embodiment of utter anomie.

Such works were notable exceptions to the countless protest pieces that have no relation to art, however.

Ai Weiwei Is Not an Artist

Protest is a vitally important recourse in any society short of a utopia. But absent art, it has no place in an art museum. That caveat applies to Ai Weiwei—China’s most famous “artist-activist”—no less than to the innumerable others in that category. Given Ai’s fame, of course, it is no surprise that his work was featured in the Guggenheim show. In addition to an ongoing documentary film series co-curated by him (Turn It On: China on Film, 2000–2017)—which included some of his own work—Ai’s nearly lifesize photographic triptych Dropping a Han Dynasty Urn (1995) filled a large wall. According to The Art Story website, this piece “demonstrates his show-stopping conceptual brilliance.” It strikes me as a rather heavy-handed gesture in more ways than one, however—whose political message was vitiated amidst tangential speculations regarding the actual value of the crockery involved.2 In any case, it isn’t art any more than Marcel Duchamp’s “readymades” (a chief source of inspiration for Ai since his years as an art student in the U.S. in 1981–1993) are art.3

More effective as political protest but even farther removed from the realm of art was Ai’s most acclaimed instance of anti-government activism, his Sichuan Earthquake Names Project—prominently featured at the Guggenheim. Heartrending videos of survivors testifying to the loss of loved ones in the face of bureaucratic evasions and irresponsibility were displayed alongside a list of the thousands of victims identified by the project.

Moving though this testimony to tragic loss and monumental wrongdoing was, it constitutes a species of documentary reportage, not a work of art. Curators and museumgoers alike should recognize the difference.