The Art of Looking (Basic Books, 2018) by art critic Lance Esplund—a frequent contributor to the Wall Street Journal, among other prestigious publications—is yet another of countless attempts to reconcile the public to the bizarre inventions of the avant-garde.1 A more fitting title would be “The Art of Critical Spinning.”

Subtitled How to Read Modern and Contemporary Art, the book begins: “The landscape of art has changed dramatically during the past one hundred years.” Indeed it has. As Esplund then recounts, we’ve seen things ranging from Kazimir Malevich’s Black Square and Marcel Duchamp’s urinal dubbed Fountain to Jackson Pollock’s “drip” paintings, Andy Warhol’s Campbell’s Soup Cans, Piero Manzoni’s Artist’s Shit, and Chris Burden’s performance piece Shoot. “Is it any wonder,” he asks, “that the art-viewing public is bewildered, even intimidated?” How about “disgusted—even totally alienated,” I would ask.

Yet Esplund sees nothing wrong with such inventions. He treats them all as if they were continuous with traditional painting and sculpture of the past. His aim is to make contemporary art “more approachable, by illuminating the similarities between recent and past art.” Like other defenders of the avant-garde, however, he thereby ignores or discounts the explicitly disjunctive intentions of the most radical of its inventors—from the abstract pioneers to the early postmodernists—who knew very well that they were breaking with the past, not continuing it. More on that below.

Esplund defines contemporary art as “any art being created by living or recently deceased artists— . . . whatever the mode and materials and subjects.” Yet like most other critics he says nothing about traditional contemporary work like that in “Contemporary Art Worth Knowing.” Only two of the sixteen works illustrated in his book—Edouard Manet’s Déjeuner sur l’herbe and The Cat with a Mirror I by Balthus—are representational paintings. And both are aggressively “modern” in their markedly transgressive content.

Despite the chaotic diversity of works he accepts as art, Esplund nonetheless aims to demonstrate what he sees as the “continuum of art’s language.” It leads him to draw some very dubious connections.

What Is the Language of Art?

For millennia prior to the invention of “abstract (nonobjective) art,” the universal language of art consisted of imagery. Contrary to a widely held view in response to the advent of nonobjective work, the “elements of art” discussed by Esplund—line, color, shape, texture, etc.—do not constitute the equivalent of a “language.” Properly speaking, they are analogous merely to the letters or syllables of a language. It is not through such elements in themselves but through the images they constitute—images representing recognizable objects, albeit often in a highly stylized rather than realistic manner—that art most powerfully conveys its meaning. And it is through our experience of objects in the real world that we understand it. In the absence of imagery, art is merely “decorative.”2

Moreover, unlike spoken or written language, the visual language of art—that is, imagery—is not an arbitrary system of symbols but a natural byproduct of how we grasp reality. The abstract pioneers attempted to invent a new visual language without any reference to objects in the real world. But they failed, as they themselves in effect admitted.3 As they feared, their paintings were unintelligible to the public, who perceived them as merely “decorative,” and could not discern the deep metaphysical meaning they were attempting to convey.4

In his effort to accommodate every invention of the avant-garde, Esplund ignores such facts. Instead, he claims that the language of art “continually evolves and reinvents itself” and that this “complex language . . . often has nothing to do with the appearance of the world outside of art.” Moreover, he perversely insists that “the elements and language of art remain basically unchanged” in objects as diametrically different as Piet Mondrian’s abstract painting Composition with Blue and Damien Hirst’s postmodernist piece consisting of a real shark in a tank of formaldehyde.

Astonishingly, Esplund refers to the latter—as well as to the Great Pyramid of Giza—as a work of “sculpture”! Were his editors at Basic Books (a widely respected publisher) asleep at the helm? Was no one troubled by so promiscuous a use of that key term?

Falling into the Duchamp Trap

What, we should ask, requires us to regard a pickled shark and other postmodernist oddities as art, in Esplund’s view? Marcel Duchamp’s readymades, of course. And exactly what is a readymade? Duchamp is often quoted as having defined it as “an ordinary object elevated to the dignity of a work of art by the mere choice of an artist.”5. The only source for that quote (in French) is the Dictionnaire abrégé du Surréalisme by André Breton and Paul Éluard, however, and the attribution to Duchamp has been questioned.6 In other, more reliable sources, Duchamp unequivocally declared that he never intended the readymades as art; they were just a “distraction” for him.7

Nonetheless, Esplund offers the standard account of Duchamp’s Fountain as his “most famous and influential” work—although Duchamp’s two chief biographers treat it as little more than a practical joke. To his credit, Esplund correctly notes that the readymades were “not fully embraced until after the mid-twentieth century.” Yet he doesn’t pause to consider why.8 He merely asserts that, after Duchamp, “anything—anything whatsoever, as long as it came from an artist—could be designated as art.” As he later reiterates: “art is whatever an artist says it is.”

Never mind that Duchamp didn’t intend the readymades as art. Even if he had, why are we obliged to accede to his or anyone else’s claim that they are art? Isn’t an artist properly defined as someone who creates art? And doesn’t that definition also imply that works of art differ from ordinary objects? Why should we grant purported artists infallibility on this crucial cultural question?

Such questions go unasked by Esplund. And as he observes early in his book, the “anti-aesthetic” assumptions of postmodernism—based on the shaky foundation of Duchamp’s readymades—have become the artworld’s “reigning ideology.”

Esplund often says the right things about art in general, making points that I would tend to agree with. For example, he believes that the best artists “have something to say, and the creative means to say it well.” He also holds that the purpose of art is to “heighten . . . experience,” for viewers as well as for the artist. “The more deeply one engages with art,” he further observes, “the more deeply one engages with life and with what it means to be human.” Moreover, he notes that artists expect each viewer to engage with a work in relation to his own life experience, to personal memories and desires—I would say “values”—that the work awakens. In addition, he emphasizes (much as I have done in Who Says That’s Art?) that the experience of art can be enhanced by viewing and discussing it with other people. His ultimate goal is “to help you learn to have faith in your own eyes and heart and gut, and to feel confident reading [I would say experiencing] works of art on your own.”

So far so good. The problem arises when one attempts to reconcile such principles with the anti-traditional works Esplund focuses on. For example, he rhapsodizes for nearly four pages on Mondrian’s “extremely spare” Composition with Blue—expatiating on the “pushing and pulling” (ideas he borrows from the abstract painter Hans Hofmann and returns to throughout the book) and “tensions” of its minimalist forms and lines. Such a formalist analysis may interest him as a former painter, but how many viewers would have their engagement with life heightened by Mondrian’s abstract design? More remarkably, Esplund says nothing about what Mondrian was actually trying “to say” in such work—which was inspired by his desire, grounded in dubious tenets of Theosophy, to escape from the material world into a realm of pure spirit. How many viewers would guess that from the work itself?

Furthermore, what does Hirst’s pickled shark (which Esplund has the temerity to compare to “an Assyrian sculpture of a deity-king”) tell us about “what it means to be human”?

When Esplund discusses traditional art, he can offer illuminating insights, as in a passage about metaphor in art, likening the figure of Eve by the sculptor Gislebertus (in the wondrous Romanesque relief below, from the twelfth-century cathedral of Autun) to a serpent. 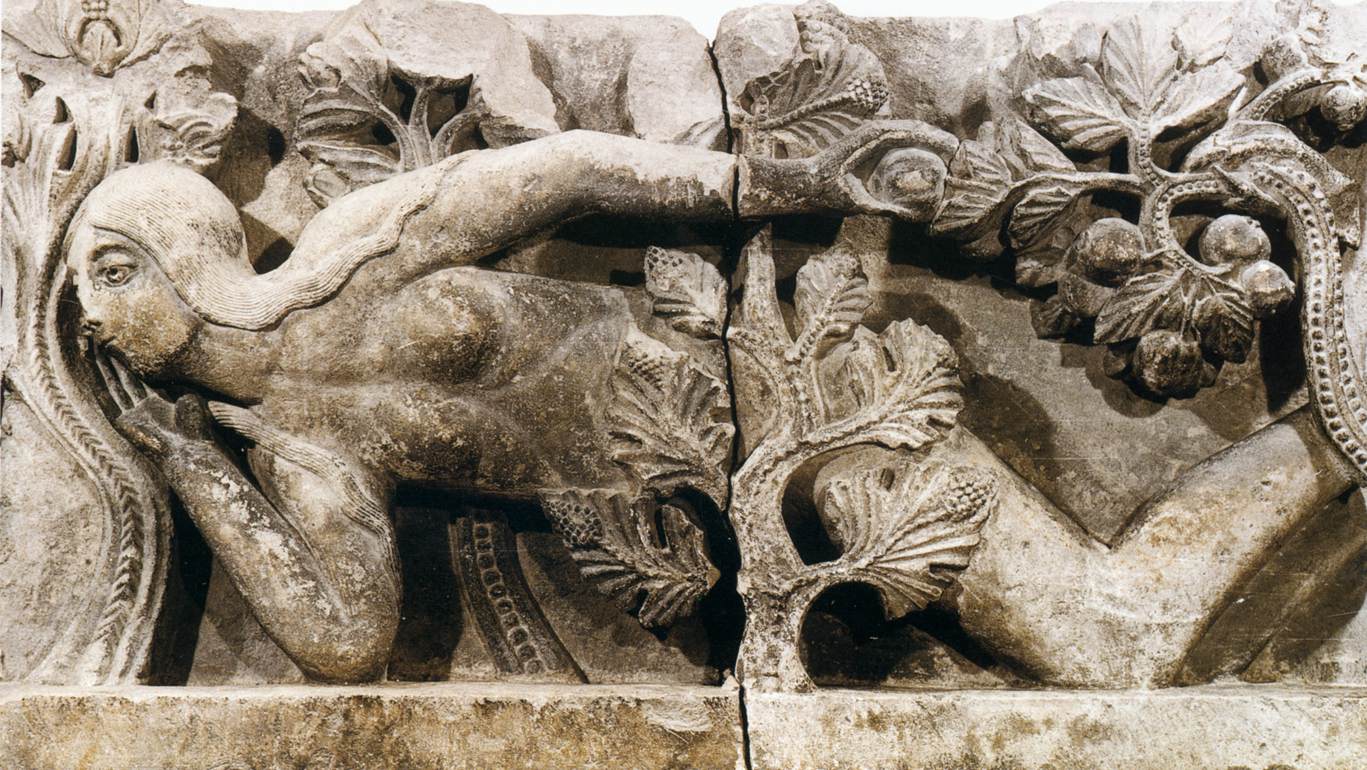 The two identities, he aptly observes, “are bridged, fused, and a new being is born—neither Eve nor serpent, but somehow a joining of the two, as she sinuously undulates, as if swimming horizontally across the rectangle—as if passing before us like a dream.”

But the value of such insights is undercut when Esplund attempts to apply them to modernist and postmodernist work. If, as he claims, Alberto Giacometti’s abstract sculpture Reclining Woman Who Dreams (1929) “explored . . . metaphoric territory” similar to that of Gislebertus’s Eve, for example, it is not at all evident in the finished work, even with the aid of the title.

That is but one example of Esplund’s failure to recognize how a normal person not besotted by artworld sophistry is likely to respond to radically unconventional contemporary work. A more troubling instance is his extended discussion of The Cat with a Mirror I by the Polish-French painter Balthus. Though he devotes nearly ten pages to that work, he fails to adequately deal with the feature that is likely to be most salient to an ordinary viewer: her pose with legs spread far apart placing her naked pubic area nearly at the center of the picture. Apart from his rather tame allusion to the fact that “she appears to be opening herself to us,” Esplund ignores that most viewers trusting their gut (as he urges us to do) would probably—and quite reasonably—be repelled by the image as redolent of child pornography.

The publisher of Basic Books touts this as a “wise and wonderful” book. I beg to differ.

3 comments on “The Art of Critical Spinning”