In both Who Says That’s Art? and my blog post “How Not to Teach Art History” (reprinted in Bucking the Artworld Tide), I cited the eminent art historian Erwin Panofsky’s interpretation of Jan van Eyck’s famed double portrait in the National Gallery, London. Panofsky viewed the work as a marriage portrait, memorializing the private wedding vows between the Italian merchant Giovanni Arnolfini and his young wife, Jeanne Cenami, in the Flemish city of Bruges. Having recently learned of scholarship challenging that view, I aim to correct the record here.

Panofsky first published his account of the painting in 1934 in the Burlington Magazine and later summarized it in his Early Netherlandish Painting.1 The “Giovanni Arnolfini” he referred to was Giovanni di Arrigo Arnolfini, the most illustrious member of the Arnolfini family living in Bruges around 1434, when the portrait was painted (the 1434 date appears prominently in the painting, just below the artist’s flamboyant signature on the back wall). Documents have since come to light that belie that identity, however. The most important of them indicates that the marriage of Giovanni di Arrigo Arnolfini and Jeanne Cenami did not take place until 1447, thirteen years later than the painting and six years after the painter’s death. Moreover, the earliest documentary evidence of Giovanni di Arrigo’s presence in Bruges dates from 1435.

An elder Giovanni Arnolfini was living in Bruges at least as early as 1419, however. He was Giovanni di Nicolao Arnolfini—whose only known marriage was to Costanza Trenta, a fellow Luccan. Their betrothal took place in 1426, when she was just thirteen years old, and their marriage presumably followed not long after (very early marriage was then common)—which would have been too early to be represented in the double portrait. To complicate matters, a letter by Costanza’s mother testifies that she had died by 1433.

In light of the foregoing facts, a research curator at the National Gallery, the Scottish art historian Lorne Campbell, suggested that the double portrait represented Giovanni di Nicolao with a second wife—although no record of such a subsequent marriage has been found.2 In addition, Campbell more crucially argued that the painting was simply a secular portrait, with no connection to the sacrament of marriage. Whereas Panofsky had read the husband’s raised right arm as signifying a marital vow, for example, Campbell argued it was a gesture of greeting to the two visitors reflected in the mirror depicted on the room’s rear wall. Not surprisingly, however regrettably, Campbell’s interpretation appears in the work’s description on the National Gallery’s website. Key details are viewed as merely “proclaim[ing] the couple’s wealth and social status,” rather than as indicating the sacramental meaning Panofsky had postulated. Such a secular interpretation is further indicated in the video on the gallery’s web page for the painting—which even suggests that the scene was set in a living room, rather than in a bedchamber.3

Campbell’s secular interpretation is echoed by the art historian Carola Hicks in her 2011 book-length study Girl in a Green Gown.4 In her view, van Eyck’s “meticulous depiction of the contents of the room and the couple’s dress” mainly served to reveal “a burgeoning consumer society revelling in vigorous international trade.” She further argued that the couple are merely “showing off the signs of [their] success—expensive clothes and other status symbols.”

The glaring problem with such revisionist views is that they largely ignore the work’s expressive aura—the qualities that fall under what Panofsky had astutely identified as the “primary or natural meanings” of a work of art. Such meanings emerge from “both the factual and the expressional” content, which are directly accessible and require no specialized knowledge or documentary evidence.5

As Panofsky rightly emphasized in Early Netherlandish Painting, an “atmosphere of mystery and solemnity . . . seems to pervade” the Arnolfini portrait. The couple “do not look at each other yet seem to be united by a mysterious bond, and the solemnity of the scene is emphasized by the exact symmetry of the composition”—as well as by their soberly contemplative facial expressions, I would add. Far from resembling a casual sign of greeting, moreover, the husband’s raised right hand appears, in Panofsky’s view, to be a “gesture of solemn affirmation,” one “invested with the . . . humility of a pious prayer” (as he suggested in his Burlington article). Also significant is the portrait’s setting in the “hallowed seclusion” of their bedroom, rather than the more public space of a sitting room.

In Who Says That’s Art?, I argued that such qualities (not the symbolic elements or the technical brilliance per se) are what ultimately make this “a great work of art, a compelling image that transcends the particular historic moment being represented and conveys something about the gravity of marriage in general.” Scholars bent on discrediting Panofsky’s symbolic interpretation lose sight of those qualities, however. Yet those are the very qualities that I maintain most hold viewers in thrall nearly six centuries after the work’s creation.

Astonishingly, in answer to the key question Why do we still so like the portrait?, Carola Hicks’s husband reports in her stead (she died before completing the book’s “finishing touches”) that she would have said that its “[technically brilliant] precision, clarity and luminosity” are what make it “particularly appealing to us today.” As he further emphasizes, she regarded “obsession with what it means” as a “blind alley, a profitless diversion that detracts from enjoyment of the painting as a work of art.” Finally, he reiterated her view that the image was (as he phrases it) “primarily designed to show off social status, wealth and importance.”

Quite a different revisionist view based on the latest documentary evidence had been offered by the art historian Margaret L. Koster in 2003, however. Surprisingly, Hicks summarized Koster’s intriguing view in Girl in a Green Gown (page 211) but omitted crediting its source, leaving the unfortunate impression that it was her own speculation. In any case, that interpretation evidently failed to alter her narrowly materialistic reading of the work. I, on the other hand, have found Koster’s view quite persuasive.

Briefly stated, Koster’s hypothesis is that the picture represents Giovanni di Nicolao and Costanza—not at their wedding but sometime after her untimely death, which had very likely been in childbirth.6 Thus it would have served not as a marriage record but as a memorial to a presumably cherished wife, lost at the tender age of twenty. Koster ingeniously supports this reading with an informed analysis of the painting’s iconography. In so doing, she reprises some of Panofsky’s key observations (albeit with varying interpretations), in addition to citing details he missed. 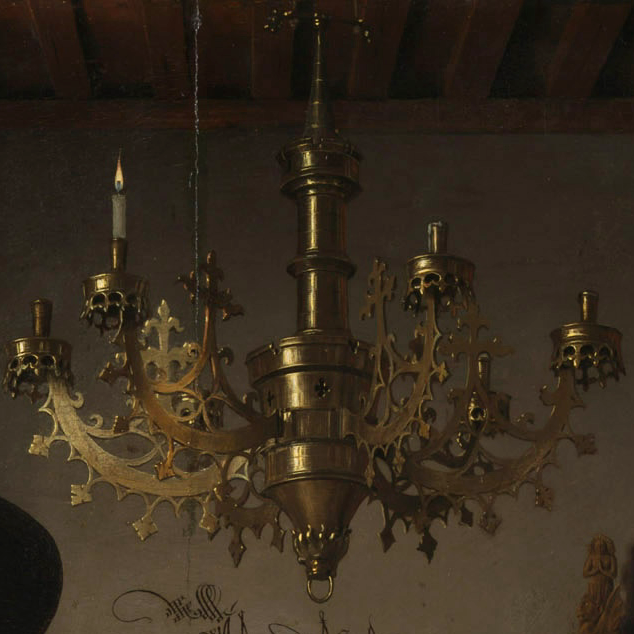 Whereas Panofsky had commented on the single candle burning on the left side of the image’s elaborate chandelier—he read it as signifying the “all-seeing Christ,” and further connected it to the frequent use of a candle in marriage ceremonies—Koster points out that a second, spent candle is faintly discernible on the side of the chandelier nearer the wife. She very plausibly argues that the burning candle signifies that Giovanni was still living, while the spent candle betokens Costanza’s demise. In addition, while Panofsky had identified the figure carved on the high-backed chair behind the wife as St. Margaret [of Antioch], the patron saint of childbirth, Koster more specifically posits it as perhaps alluding to Costanza’s death in childbirth.

Another intriguing detail viewed by Koster as alluding to Costanza’s death is the monster carved on the bench directly behind the couple’s joined hand—as if “threatening their union.” 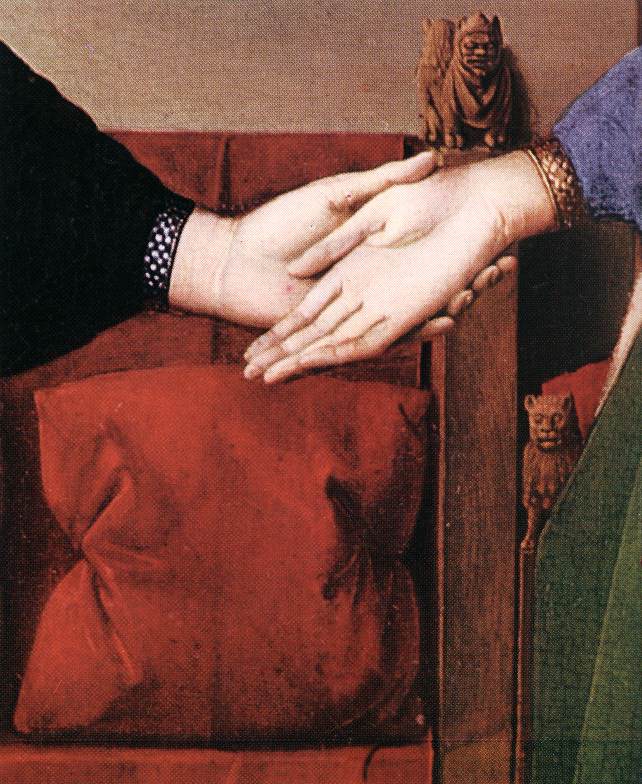 Significantly, as reported by Campbell, infra-red reflectograms of the painting reveal no underdrawing for that detail or for the chandelier, the chair featuring the figure of Saint Margaret, or the dog at the couple’s feet (which both Koster and Panofsky compared to the dogs often represented at the feet of recumbent tomb sculptures). Such evidence of the late addition of those details prompts Koster to suggest that the painting had been begun as a straightforward portrait while Costanza was still living and that they were added after she died.

Most important, Koster’s poignant hypothesis is entirely consistent with the painting’s solemn aura (as was Panofsky’s)—though oddly she scarcely mentions the painting’s expressive qualities.

Conclusion: What Matters Most

As one observer has wisely observed, the precise circumstances and intention of the Arnolfini portrait may never be “indubitably uncovered,” for it would depend on evidence that may simply never be available.7 What is available to us, however, is a core level of meaning discernible from the work’s expressive content. Whether intended as a marriage record or as a memorial to a dead wife, what the Arnolfini portrait clearly conveys is a moving sense of the grave import of conjugal union. That core meaning emerges from van Eyck’s incomparable handling of the work’s primary, “natural” subject matter. In the end, I maintain, that is what most matters in this, as in any, work of art. Anyone can pepper a painting with symbolic details. The artistry lies in creating a meaningfully compelling image.