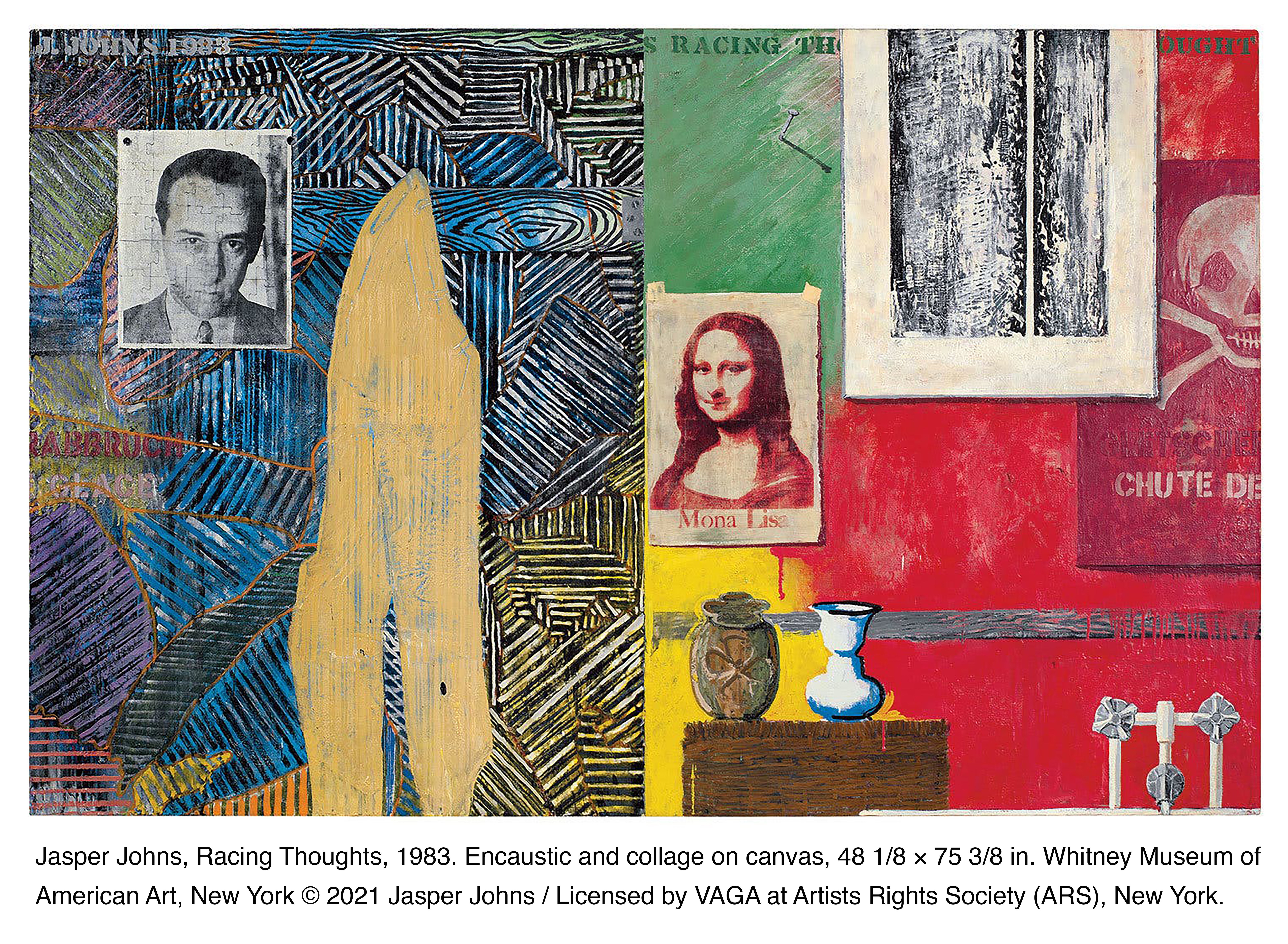 Jasper Johns: Mind/Mirror—a mammoth two-part show at the Whitney Museum of American Art in New York and the Philadelphia Museum of Art through February 13, 2022—is the most comprehensive retrospective ever devoted to Johns’s work.

What entitles him to an exhibition of such unprecedented scope? In the Whitney’s exalted view (generally shared by the artworld mainstream):

Johns’s groundbreaking work sent shock waves through the art world when it was first shown in the late 1950s, and he has continued to challenge new audiences—and himself—over a career spanning more than sixty-five years. . . . [His] early use of common objects and motifs, language, and inventive materials and formats upended conventional notions of what an artwork is and can be.

Circumstances have kept me from visiting the exhibition in person. But I know enough about Johns and his work to suspect that I would have found it mind-numbing in the extreme. Because I subscribe to the old-fashioned idea that art needs to do more than challenge prior notions of what art is.

In lieu of an exhibition review, therefore, I cull here some of my previous thoughts about Johns and his ill-founded artworld repute.

To begin, here’s what I wrote in Who Says That’s Art? (links are added here):

The pointlessness openly admitted to by [Robert] Rauschenberg also characterizes the work of his younger colleague Jasper Johns. Typical works by Johns featured in a 2008 retrospective at the Metropolitan Museum included such banalities as Coat Hanger II and Flashlight, both from 1960. Johns first achieved fame in the 1950s, with paintings of flags and targets. Regarding his choice of these pictorially unpromising subjects, he told Time magazine: “[P]ainting a picture of an American flag . . . took care of a great deal for me because I didn’t have to design it. So I went on to similar things like the targets—things the mind already knows.”1 On another occasion he explained: “My primary concern is visual form. The visual meaning may be discovered afterward—by those who look for it. . . . I feel that what I am doing is quite literal.”2 And another: “[Such subjects] are just the forms . . . which I have chosen to limit and describe space.”3

Nor do Johns’s notebooks suggest any deeper meaning or thought. Among their aimless jottings are the following: “Put a lot of paint & a wooden ball or other object on a board. Push to the other end of the board. Use this in a painting.” And “Take a canvas. / Put a mark on it. / Put another mark on it.”

What Johns and Rauschenberg did is in no significant way comparable to what true artists have always done. As their own words attest, they made no attempt to embody meaning intelligibly. Instead, they were engaged in what my grandmother might have referred to as potchkeeing around in the studio. As translated by Leo Rosten in The Joys of Yiddish, that apt term means “To fuss or ‘mess around’ inefficiently and inexpertly.” One of Rosten’s sentences illustrating the word’s proper use fits perfectly here: “He potchkees around with paint and they call him a painter.”

In “Modernism, Postmodernism, or Neither?,” I had previously cited Johns’s inane sketchbook jottings and further observed:

Notwithstanding the mindlessness of such an approach to the creation of art, the head of the prestigious Wildenstein art gallery in New York—a gallery famed for its handling of Old Master paintings—recently referred to Johns as today’s “greatest living artist.” Surely a sign of just how precipitously the artworld has declined from any meaningful standard!

Also indicative of the artworld folly regarding Johns’s work was this brief note by Louis Torres and me in the January 2004 issue of Aristos:

When the expanded and renovated Museum of Modern Art in New York reopens next year, one of the new acquisitions you will have a chance to see is a drawing by Jasper Johns entitled Diver (1962–63)—“one of the most important works on paper of the 20th century,” according to the ever-credulous Carol Vogel of the New York Times. At nearly seven feet tall and six feet wide [!], the work is said to be worth over 10 million dollars. According to John Elderfield, the museum’s chief curator of painting and sculpture, it is “the most profound and intense work of art that Johns has created in any medium.” Purportedly alluding to novelist Hart Crane’s suicide by drowning in 1932, the drawing was a study for the painting of the same name. Just in case you can’t make out much from Johns’s inept scrawl, here is Vogel’s description: “Drawn on brown paper with charcoal, chalk, pastel, and probably watercolor, the work abstractly suggests a diver in motion, showing two sets of hands, one touching and pointing down as though preparing to dive and the other coming back up as if the figure were rising.”

On the mental somersaults engaged in by critics who strive to find meaning in Johns’s inane work, I noted the following in Bucking the Artworld Tide:

In suggesting a possible lesson for a high school art class studying American painting after World War II, [Arthur] Efland unquestioningly accepts a highly dubious interpretation of a work by Jasper Johns. He approves the notion disseminated by the critic Robert Hughes (in his televised American Visions series) that the “submerged text of Johns’s target paintings connects to the stresses of Cold War America.” In addition, he accepts Hughes’s claim that Johns’s Target with Four Faces (1955) may also relate to the sense of personal paranoia that Johns, a homosexual, probably felt in a period when homosexuality was thought to have (as Hughes put it) “secret affinities with Communism.”

Such interpretations fly in the face of everything Johns has ever said about his work, however. To judge from his own repeated statements, his creative choices were arrived at casually, the product more of whim and happenstance than of paranoiac feelings of any kind. On his use of flags and targets as subjects, for instance, he told Time magazine in 1959: “[P]ainting a picture of an American flag . . . took care of a great deal for me because I didn’t have to design it. So I went on to similar things like the targets—things the mind already knows.” He told another interviewer: “My primary concern is visual form. The visual meaning may be discovered afterward—by those who look for it. . . . I feel that what I am doing is quite literal.” And another: “[Such subjects] are just the forms that interest me and which I have chosen to limit and describe space.” Finally, Leo Steinberg, the art historian who first put Johns on the artworld map, has reported: “I . . . once ask[ed] why he had inserted these plaster casts [in the target painting], and his answer was, naturally, that some of the casts happened to be around in the studio.” As for why Johns cut off the masks just under the eyes, he told Steinberg: “They wouldn’t have fitted into the boxes if I’d left them whole.”4 So much for paranoia—Cold War or homophobic.

I rest my case.